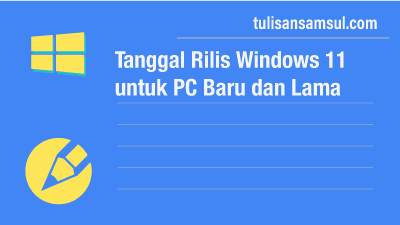 As already discussed on the official sites that Windows 11 for version 21H2 is already in the final stages of testing, with the upgrade expected to be released in the preview channel in the coming days.

Furthermore, Microsoft itself will soon upgrade this Windows 11 to the release preview channel in the beta testing program. And this will be the final step in the testing process ahead of the already scheduled October 5 release. We look forward to bug fixes and quality improvements in future preview builds.

Hopefully this release of Windows 11 will be overhauled with better improvements of course. However, it is said that no new features will be added. As expected, Microsoft itself has already delayed support for Android apps for the operating system, as expected in 2022. And it is possible that android app support will be bundled with the “Nickel” release of Windows 11 22H2, which will be scheduled for October 2022.

Windows 11 is expected to come with all the features currently available on the beta channel of the Insider program, those features include:

Windows 11 will roll out gradually on October 5th

Some of the information you get may already know that the reason for the long release of Windows 11 was indicated by a lot of interference from a large number of people.

It’s no wonder that Microsoft is very careful this time in testing this new operating system and plans to release updates gradually to avoid such a repeat of updates on Windows 10.

The bad news is that Windows 11 won’t ship to unsupported devices. And initially only those who meet the requirements will get an upgrade.

Microsoft itself says that further updates will be rolled out from time to time to devices in the market based on an intelligence model that considers hardware eligibility, reliability metrics, device age, and other factors that affect the upgrade experience.

It’s further noted that all eligible devices will have access to Windows 11 by mid-2022.

Maybe it’s brief information about the upcoming release of Windows 11. Hopefully this information is useful for those who have been waiting for Windows 11 for a long time. and hopefully Microsoft recycles another system for those who don’t qualify for Windows 11 huh. If the reason is testing, I agree that Microsoft says Windows 11 will only ship on supported devices. Logically this is also still new. The developers themselves still haven’t thought of anything other than a better upgrade. So, let’s wait until Microsoft is kind enough to provide another solution for users who don’t meet these requirements.