It’s been a long time since I wrote a review about toys, it’s been more or less 2 weeks. The reason is because during those 2 weeks I was busy writing articles on business topics. But now the toy review article is back for you. Let’s have a look. ️

In this review article, I will write about one of the WGG units (or also known as Gel Blaster). The weapon model itself is the M24 Sniper type. This is one of the most popular weapon models in the PUBG game.

See the real appearance of the product in this video:

However, just like the previous reviews, before reviewing the Gel Blaster unit which is a replica weapon model, I will first review the original weapon. I mean this with the aim of increasing our knowledge of the types of weapons in the military world (especially for gun enthusiasts).

The M24 Sniper Weapon System (SWS) is the military and police version of the Remington Model 700 rifle. The M24 became the model name assigned by the United States Army, after being designated their standard sniper rifle in 1988.

The M24 is referred to as a “weapon system” because it consists not only of the rifle, but also of detachable telescopic sights and other accessories.

This “long action” allows the rifle to be reconfigured for larger cartridges of dimensions up to 3,340 inches (84.84 mm) overall.

The first number is the magnification of the scope (10) and the second number in millimeters (40mm) is the diameter of the objective lens. Fixed power scopes have only one magnification (for example, 10×).

The M24 SWS will be replaced with the M110 Semi-Automatic Sniper System, a contract awarded to Knight’s Armament Company. However, the Army still continued to procure the M24 from Remington through February 2010, and was upgraded to the A2 and M24E1 standards in most cases, (continuing to serve).

The United States Army chose to upgrade all of its M24 rifles in its arsenal to the M2010 Enhanced Sniper Rifle, with the final M24 converted in April 2014.

Thus above a brief review of the specifications of the M24 sniper original weapon.

Now we will discuss about the replica unit, namely the Gel Blaster unit with the same name as the original weapon.

Let’s see what it looks like in the photo below. 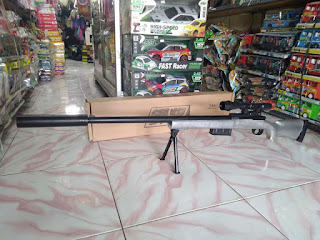 The photo above is the appearance of this M24 Gel Blaster unit after it is assembled and installed perfectly. The total length of this unit is approximately 130 cm. This WGG unit has a 1:1 scale, so it is the same size as the original weapon.

Because it must be assembled, then of course when you just bought this unit it was still in separate parts.

Let’s see what it looks like in the photo below. 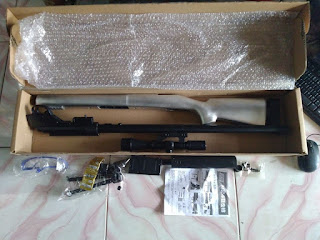 As above, that’s what this unit looks like when you first unbox it. Is it difficult to assemble it? Don’t worry, it’s easy to assemble, because this unit already has a guide on how to install it (see white paper in the photo above).

As the name implies Water Gel Gun (WGG) or Gel Blaster, this toy/sports weapon unit uses bullets made of Gel material. The bullet itself was very small in size, about the size of a sesame seed and still dry. Try to pay attention to the small plastic sachet (golden color) in the photo above, it contains the dry gel bullet inside. So that the shape turns into a gel, the dry bullet must first be soaked in water for 1 to 3 hours.

After that the shape will look like in the photo below. 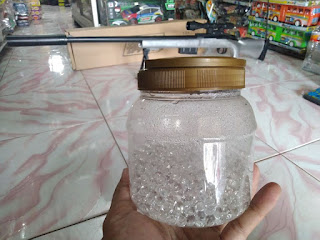 That’s on top of the gel bullet.

In the photo above, it looks like the bullet is clear because the default bullet is also clear. In addition to the clear color, these gel bullets are also available in many other colors, such as red, blue, green, etc.

You need to know that this Gel Blaster unit is very safe to use for war games. This is because the gel bullet immediately melts when it hits the target. Therefore there is no prohibition to use this unit freely.

The conditions are very different from the ‘colleagues’ of this unit, namely Airsoft guns whose use is increasingly being strictly regulated. This is because Airsoft gun bullets are made of solid plastic material, so they are hard and dangerous if they hit certain body parts. Therefore, the Airsoft gun unit cannot be carried anywhere and should not be used anywhere.

Maybe you will ask: “What is the price tag for 1 unit of Gel Blaster Sniper M24?”

The price of this unit is quite varied. But usually sold with a price range between 800,000 to 900,000 rupiah. This product is pretty much sold by people in e-commerce and online stores.

That’s the review of the toy unit this time, see you again in the next no less interesting review. Regards.