Fix LTE MIUI 8 Redmi 3 – How how to solve the missing 4G network menu on the Xiaomi Redmi 3 cellphone MIUI 8 ? As users of Xiaomi Redmi Note 3 of course we know that it is quite difficult to find 4G network settings on Xiaomi MIUI 8 the. This is because there is a TKDN (Domestic Content Level) rule issued since 2016 which makes it difficult for the Xiaomi Redmi 3 users to activate the 4G signal on their Xiaomi cellphone. The 4g signal cannot be active on the xiaomi redmi 3 cellphone is the impact of existing regulations where Xiaomi inevitably has to disable or make the 4g signal option not appear in the xiaomi network settings with MIUI 8 ROM.

So if you see conditions like that, is there still a way to lock the 4g network on the xiaomi with the miui 8 rom? Because if we can’t lock the 4g lte signal on the xiaomi redmi 3 then we won’t be able to feel surfing in the internet world using an lte network connection. Then, how how to get 4g signal to appear on xiaomi miui 8 the ? Maybe on some sources on the internet by using dial *#*#4636#*#* we can already restore the lost 4g signal but if we apply the 4g signal lock method to the xiaomi redmi note 3 cellphone then what happens is the 4g network menu does not appear / is lost.

Therefore, on this occasion our Smartphone Solution will try to provide the latest way to open a 4g network on miui 8.1.3.0 with a 4g / lte fix. To unlock the 4g redmi note 3 miui 8, we did this by installing the teleservice patch made by Indra Binuners. However, to be able to overcome the 4g network not appearing on the xiaomi redmi note 3 cellphone, we must first unlock the smartphone’s bootloader and install TWRP. Let’s just take a look at the full review on how to solve it Xiaomi phone can’t lock 4G network when using the MIUI 8 (Marshmallow) ROM below. 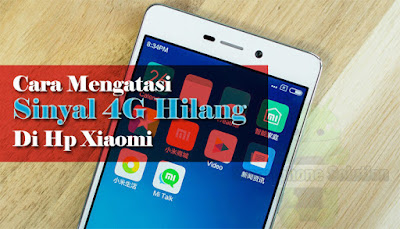 Indeed, basically we can manually select the network that is used to be an internet connection by selecting the network on the Xiaomi cellphone. For setting the 4G network on the xiaomi android smartphone is also not too difficult, we only need to enter the network settings and then just activate the 4g signal that we want.

But the problem that occurs in the xiaomi redmi note 3 rom miui 8 with a distributor warranty is that there is no 4g network menu in the phone settings. In addition, if we use a xiaomi smartphone with a distributor warranty, the 4g network option will be lost if we do a custom rom from miui 7 to miui 8. And if we do a factory reset it actually makes the 4g signal on the xiaomi cellphone not appear.

How to restore lost 4G network on xiaomi phone

However, for those of you who experience that the 4g signal option is not in the network settings of the xiaomi redmi note 3 cellphone, you don’t need to worry anymore because we have a solution for this problem. And we have successfully used the method below on the Xiaomi Redmi Note 3 with ROM developer version 7.5.23 MMB29M which was released on May 23, 2017.

Let’s just look at the steps for the Xiaomi ROM MIUI 8 cellphone, can’t select 4G LTE in the network settings menu as follows:

How to set a Xiaomi cellphone signal that doesn’t appear

Thus our post this time, which just discussed the 4g menu option on the xiaomi redmi 3 cellphone, did not appear. Hopefully the post above can be useful for all of us, thank you so much.