See you again with bang izal. ️
Hopefully we are all in good health and always yes. Amen.

At this meeting I want to share, tell stories, and discuss with all my friends.

In this discussion, we will discuss an assumption that unconsciously often clings to our mind/subconscious mind, namely that success (as if) absolutely depends on capital.


And the effect weakens the spirit (some) of our friends who want to try to open a small business but have minimal or mediocre capital.

It often happens and is embedded in the subconscious of some of us, that capital is only about money, money and money!

In the subconscious mind, it has been embedded as if success is only the monopoly of people with money. 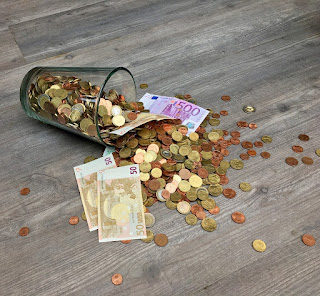 If you have minimal capital, it will be very difficult to be successful! (Serious??)

It is true,,,, one of the supporters in the business is capital and all supporting facilities.

That’s true, but not absolutely true!


Some of us sometimes seem to forget the most basic and most important of human capital,

The three points above are the most important capital!
Also the most valuable treasure!!

There are still few of us who are willing (dare) to change our ways and patterns of thinking.
Namely changing our shortcomings (lack of capital and facilities) into our strengths!


Maybe some of my friends are missing mudeng, and asked:

“It means how bro izal?”

So it means this:

Try to instill in ourselves and our subconscious, say it to ourselves;

“This lack of capital should be my ‘strength’!”.


I often have to remember a phrase:
“If people are in a pinch, they should come out on their creative side!!”.


Embed the above words and expressions in our subconscious.
Precisely with minimal capital it should make us even more motivated!


Until finally one day we can achieve all these goals. That is success, success.

High flying hours (read: SKILL, EXPERIENCE, and Toughness) in the field of business that has achieved success!

And the three things above (Skill, experience, toughness) are actually the most expensive assets and the most valuable capital that you have obtained, namely ‘the flight hours are already high’.

So if one day your business is hit by a problem, friends will no longer panic and be confused in dealing with it.

Because the ‘business mentality’ has been trained and used!

Because in the past when pioneering was full of difficulties and struggles.
It’s done! ️

So,,,,,,,,,
The biggest and most important strength in starting a business is not absolute in the material (capital). Because the nature of matter is only a tool!

And the name of the tool, the result depends on who and how the person uses it.

Strength of the heart (spirit),

The power of mind (belief) and
Fighting power (willingness).

The combination of the strength of the heart, mind and will that will be able to create adrenaline.

Which would be able to break through the bounds of impossibility and break down all barriers.

Friends,,,,,,,,
In the classic story of Islamic history, it has been recorded how heroic the spirit, faith and determination of the Muslims were. Those who at that time were still few in number, but were able to win the battle against the Qurayshi infidels on the battlefield of Badr.

The calculation and logic is very unlikely, even almost impossible for Muslims at that time to win. With the number of troops only 300 people against 1000 people.
It’s logically impossible!


But it has been recorded forever in history.

With a truly unbalanced strength (comparison 3:1), but the Muslims were able to achieve a resounding victory in the battle of Badr.


Likewise with the classic story of the children of Israel.

How heroic was the belief and spirit of Prophet David, with only a throwing weapon (slingshot) but was able to defeat and kill Jalut (goliath) in the duel war.

Whereas Jalut is a trained soldier (there are also sources who say he is a warlord) tough and tall. Meanwhile, Prophet David at that time was still a teenager and armed with very simple weapons (slingshots). But his agility, agility and fighting spirit are able to break down all the limitations on him.


Although perhaps the analogy above has nothing to do with the business side.

But in terms of fighting spirit, determination, resilience and confidence in the face of trials so that they can finally achieve victory (success), all of these values ​​will remain relevant throughout time.

Therefore, if we are going to take a path in starting a business, the most important initial foundation that must be built is determination first, strengthen confidence and self-confidence!

Do not when just starting a business, we immediately create barriers and walls of obstacles in our minds, spreading thorns in our subconscious, which actually makes us hesitate to take a step!

Here are some examples of words that are often heard:

“Ah,,,, What to do, want to open a business it’s so hard, there is only this capital, where is enough for capital?!”

“Ah! It’s impossible for me to be able to progress like you, well, you’re already good, your business is big, you have a lot of capital!”

Uh, kang, mas, uda, brother, sister sadayana,,,,
Do you know how the story used to be?
Do you know how bitter, bitter and difficult our struggle was before the success you have seen now?

And regarding the assumption that people who have a lot of capital and facilities (his father is rich or rich) will have a greater chance of success for him, that is not entirely true.

How many facts are happening in the field, his father is rich, rich and successful, and his son can only spend his parents’ wealth!

That’s how it keeps happening.
How can I know?


Because by chance it happened to my wife’s parents’ neighbors (in Tangerang area).

Back in the Dutch era, that person’s great-grandfather (from the father’s line) owned a very large land in the area. It is said that one village in the area around my wife’s house used to be the land of her great-grandfather. But now the vast land has been divided and divided, some have also been sold.

Meanwhile, that person’s father is a contractor and has a fairly large rental service for heavy equipment. So his grandfather and father were actually great people.

But unfortunately for his son, because he has never started a business from the bottom and is only used to holding hands, in the end any given business always ends in bankruptcy, exhausted!

So the main foundation of success is a matter of mentality, passion and hard work ethic!

And once again the name of the tool, the result of course depends on how the wearer.

How many times have it been proven that people whose businesses are now successful and well-known, previously started with “knee capital” aka very minimal and mediocre capital.

But yet they are able to prove and can be a big success.

I have written their stories in full here: REQUIREMENTS FOR SUCCESS MUST HAVE BIG CAPITAL (who said?). Please read it, friends, to make it more enthusiastic. ️

Thus,,,,,,
First of all, I beg you,
Once again sorry, I’m writing like this with absolutely no intention to patronize, but purely as input, suggestions and at the same time corrections for the sake of goodness.

As long as there is a sense and concern to remind each other, it means that the person is still caring and loving to us. ️

There is a good quote (phrase):
“A true friend will often advise and criticize you. Even though his advice and criticism may sound bitter, accept it! Because he only wants the best for you. And friends like that are truly true friends.

While a sign that someone doesn’t care about you anymore, he will let whatever you do, no matter whether it’s good or bad for you.

Hopefully we can all achieve what we aspire to.