Xiaomi contact problem – How how to solve contacts not showing on whatsapp cellphone xiaomi ? Of course it will be a problem if xiaomi phone can’t bring up contacts in whatsapp app. This is because the WhatsApp application has now become one of the chat applications that are often used by Android smartphone users. So if the whatsapp contact is not visible on the xiaomi cellphone, it will make it difficult for us to communicate with our friends through the application.

Therefore Smartphone Solution this time I will try to give tips on setting up contacts on xiaomi cellphones so that WhatsApp can bring up the number of our friends who don’t appear. So we don’t need to worry anymore if we have tried to update the wa contact but still the whatsapp friend’s cellphone number does not appear on the xiaomi cellphone that we have. Although there are many factors that cause the contact number in the phone book of the Xiaomi cellphone to not be visible in the WhatsApp application, here we will review in full about how to show whatsapp contacts on xiaomi phone in the review below.

How to Show Contacts Not Appearing On Whatsapp Hp Xiaomi 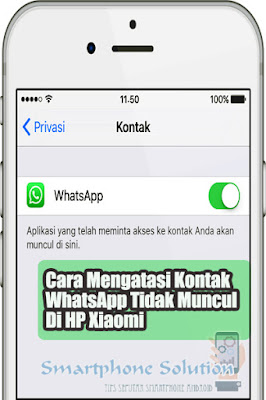 But before we start discussing the xiaomi cellphone contact settings that make mobile contacts not appear in the WhatsApp contacts of the device, it would be better if we try to find out in advance the reason why the wa contacts don’t want to be seen. Below are several factors that can make phone contacts not appear in the WhatsApp contacts on our xiaomi cellphones, including:

So actually the solution so that contacts can be seen on WhatsApp what we need to do is to change the settings so that WhatsApp is allowed to read contacts via Security > Permissions > Permissions > WhatsApp > Read your contacts > Accept. But for more details, let’s just take a look at the complete review below:

How to solve WhatsApp contacts not appearing on Xiaomi cellphones