Are you tired of endless ads, bonus videos and in-app purchases while playing games on your Android? Do you prefer to play PC games on Android?

You can, thanks to Parsec. Whether you have an Android phone or tablet, it’s now possible to stream games from your PC or laptop to your Android device. And it’s easy to do.

In this article we explain how to play PC games on your Android using Parsec, what you need to do, and why it’s a good idea.

With nearly 30 years of play to choose from, and most of today’s AAA titles, PC gaming is showing no signs of dying out. As good as gaming is on Android, it falls short of playing games on Windows, macOS, and even Linux.

We’ve previously seen how you can play games on Android using the Steam informasi app. However, that solution is limited to Steam games. What if you use an alternative digital distribution service, or have a game you installed from disc?

The answer is to stream games from your PC to your Android with Parsec.

Before starting, visit the Parsec website to download the PC server application. It is available for Windows, macOS, and Linux.

How to Set Up Parsec to Play PC Games on Android

Setting up Parsec on your Android device and PC is a breeze and it can even stream games at 60 FPS. However, you need to set up your Android, PC and network before starting.

For best results playing PC games on your Android device, you need an Android compatible game controller. Several such devices are available; However, we found the best results were enjoyed with a USB controller using a USB OTG connection on Android.

The reason for this seems to be a conflict between some Bluetooth controllers and the bandwidth used to connect to your PC via Parsec.

While convenient, running games on PC to play on Android can’t be done entirely over Wi-Fi. Instead, you should make sure your PC is connected to the router via Ethernet. This may not be immediately practical but will ensure a reliable connection. It’s a good idea to take some time to make sure your network is ready before getting started.

If there’s no way you can do this, then an alternative is to use the 5Ghz band on your router. However, if both devices are connected at 5GHz, then the PC and Android device must remain in the same room (or close) to the router. The wall weakens the 5GHz signal.

It is possible to use Parsec with two devices on different networks. However, you should know the strengths and capabilities of the network beforehand. Using 4G/LTE is an option, but if your carrier operates a monthly cap, it’s not worth wasting your data on a few hours of gaming. Keep using Wi-Fi.

The next step is to create an account with Parsec. You will get the option to do this the first time the server software runs on your PC. This account lets you manage all the devices on which you have Parsec installed, change settings, and even host remote multiplayer gaming parties.

Keep the details handy, as you will need them to log into Parsec on Android.

Setting up Parsec on Android

You can grab the Parsec app from the Play Store. After installing, open the app and log in. Before proceeding, make sure your Android device is connected to the same network as your PC. 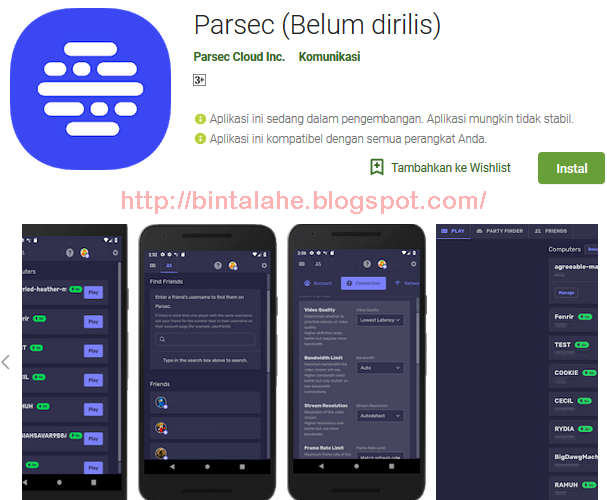 Most of the configuration for Parsec is done on your PC. However, you can change the Client and Network settings on the Android client. Access this by tapping the hamburger menu button, then the Settings cog. 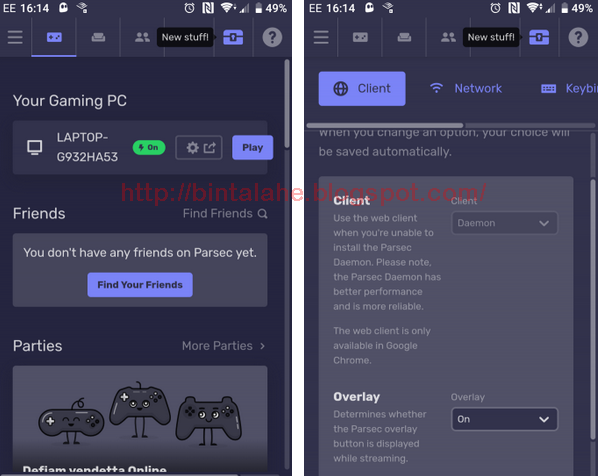 In the Client you can toggle whether the Parsec Overlay button is shown. This gives you quick access to the Parsec client while connected to your PC. On the Network tab, meanwhile, you can specify a Client Start Port (leave blank to let Parsec choose). Use UPnP to configure the router to route traffic to Parsec on your Android device.

On your desktop, open the Parsec server application and select Settings > Hosting to configure basic settings. Here, you’ll find options for Bandwidth and Resolution, both of which are useful for improving streaming quality.

Also, open the Client view to check the Vsync, Renderer, and Decoder Mode options. For best results, set Vsync to On, and, if you’re using Windows, set Renderer to DirectX. Decoder should be Accelerated to reduce latency; note that older PCs will not support this option. 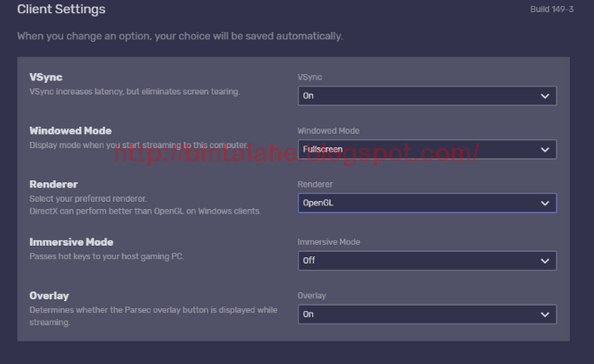 This setting will work for you. However, you may find that tweaking them then improves the quality of the stream from your PC to your Android.

Note that Parsec does more than just stream games from PC to Android. It can also set up your PC as a network party host, allowing you to connect your friends for multiplayer fun. You can also connect to existing parties.

Play Any PC Game on Android 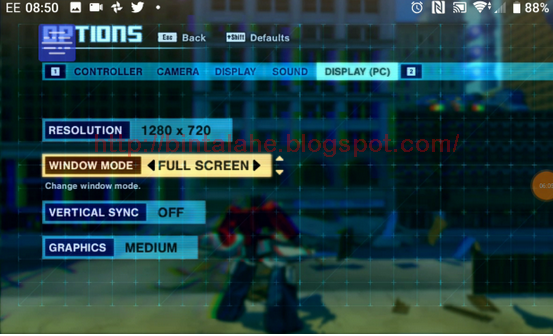 Need to switch back to the main Parsec screen? Tap the overlaid Parsec logo to access the settings.

Parsec isn’t the only tool that lets you stream PC games to Android devices. However, it comes with a proven track record, having provided this functionality on PC-to-PC systems. However, Android users may also consider:

At the time of writing, Parsec for Android is in development stage. So, consider one of these alternatives if Parsec doesn’t quite meet your requirements.