Linux photo management isn’t nearly as difficult as it used to be. Still, with a smartphone in almost everyone’s pocket, we’re all taking more photos than ever before. That means you need a strategy to manage your photos effectively.

How you manage your photos well depends on whether you primarily use a smartphone or an actual camera for most of your photos. Don’t worry, we can help you.

Importing Your Photos
How you import your photos will largely depend on how you save them. If you are using a standard camera, the best way is to import directly from your SD card. Just remove the SD card from your camera and mount it like you would any other drive. 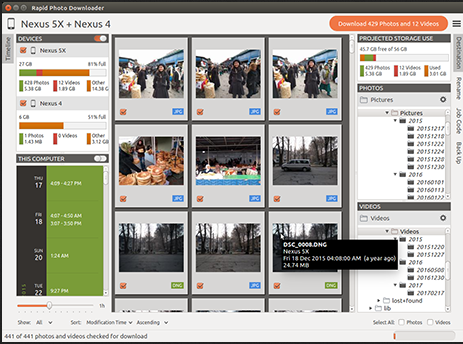 If you use your smartphone to take photos, your best bet will likely be to use a cloud storage service (see below). If your phone uses a microSD card, you can also use Rapid Photo Downloader as mentioned above. Or, connect it to your PC via USB.

Editing Your Photos
Once you’ve imported your photos, it’s likely that you’ll have to edit for a while. This could be something as simple as cropping out strangers from a vacation photo, or something more profound like retouching elements to remove red-eye.

Want to make further edits? Don’t worry, you have lots of options. GIMP is an image editing tool for many Linux users, but it’s not the only option.

Krita is one of the GIMP alternatives we’ve seen before. If you’re a KDE user, you should check it out, but it’s worth a look regardless of what desktop you’re using.
Thanks For Visit

Managing and Organizing Your Photo Library
There are many photo management applications available for Linux. There are so many

Shotwell is one of the more popular options, especially among Gnome users. This app lets you organize your photos by tags, folders, time and date, and other options. The app is also very full-featured, with built-in functions for importing your photos as well as editing them.

Darktable is another great option. Created by photographers for photographers, Darktable focuses on providing tools for those who shoot their photos in RAW format. The app has non-destructive editing features, which means you can make as many changes as you want while retaining the ability to revert to the original if you make a mistake.

Of course, you don’t need a full-featured app to manage your photo library. You don’t even need the app at all if you don’t want to use it.

Instead, you can organize your pictures on your hard drive as you normally would organize files. This has the benefit of simplicity, and you can always keep your images synced with the cloud service. We will explore this in the next section.

If you want to move in another direction, you can try Lychee. This app lets you set up your own photo server, either on your own computer or on the internet. If you are wary of cloud storage after seeing too many cloud services shut down over the years, this option could be perfect for you.

Saving and Syncing Your Photos

Once your photos are imported, edited, and organized, it’s time to think about storage. While you can store it on your hard drive, it doesn’t make it easy to share.

While you can give Lychee a try, you might just want to opt for cloud storage. Dropbox is everywhere and works great on Linux. Google Photos is also a popular choice, especially among Android users.

If you want to use Google Photos, you can even access your photos on your computer via Google Drive.

Not a fan of cloud storage? You’ll still want to keep copies of your photos elsewhere to keep them safe. Simply copying it to an external hard drive every now and then works, but it’s not fool proof. If you go this route, you will often want to make a backup, using more than one drive.