Having access to the Android apps and games of your choice brings an exciting new dimension of productivity to your Linux desktop or laptop. Mobile apps are, by design, much simpler than those found on desktop operating systems.

Meanwhile, mobile games are becoming more and more sophisticated. It makes sense that you might want to continue playing on different devices, especially given the limited battery life of your phone or tablet. Sure, you can plug in your device to charge it, but being able to play games on your computer can give you an edge.

Several macOS and Windows tools are available to run Android apps. The most common tool for running Android on the desktop is Bluestacks, but it is not available for Linux.

Instead, Linux users should try Anbox, a free and open source alternative based on the latest version of the Android Open Source Project (AOSP). Offering a window-based Android environment, complete with apps and games, Anbox uses containers to separate Android from the host operating system (that is, the OS on your computer).

That’s not all; apart from being open source, Anbox has no limitations, so in theory you can run Android apps on Linux. There’s no hardware virtualization either, and Anbox can work on laptops or desktops as well as possibly on Linux-enabled mobile devices.

This last point is very significant, as it can solve the problem of engagement with Linux phones.

Even though it’s free to use, Anbox comes as a snap package. This means that the binary and any dependencies are included in one package, making installation easy. Unfortunately, it can also mean that your Linux OS can’t use Anbox unless it can unpack and install locks.

The snapd service is required to install snaps, and it is compatible with Linux distributions such as:

On Ubuntu, it’s been installed from 14.04 onwards. You’ll find full details for your distro on the Snapcraft website.
To install snapd, use the following terminal command:

Wait for the installation to complete before continuing.

With snapd service installed on your Linux PC, you are ready to install Anbox. This is done using the following command, which installs everything you need:

You will be asked for your password before the snap package is downloaded. 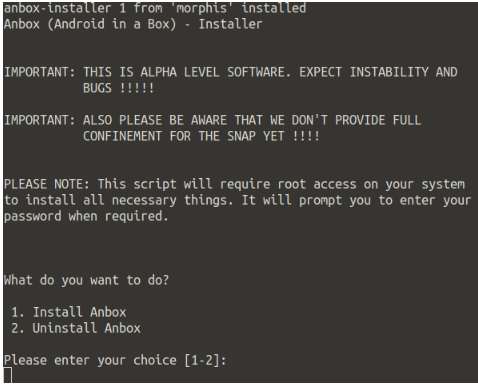 Shortly after, you will be presented with the following options:

If you need to uninstall the software at a later date, simply run the installer command above, and select option 2. However, in the case of installing Anbox, you can proceed with option 1. 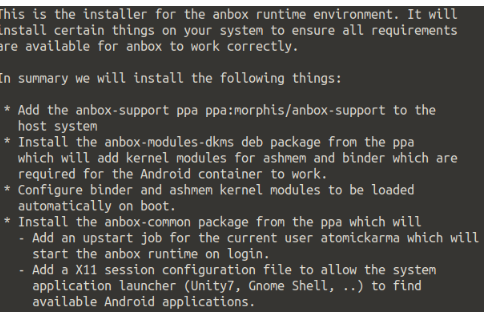 After this, you will see a summary of what the installation will do. For example, files added from the PPA are highlighted, as is the information that the anbox runtime (the software library that allows other software and applications to run) will autostart when you log into Linux.


If you’re happy with all of this, enter the I AGREE legend, and wait for Anbox to install. Once done, follow the instructions to reboot your system before continuing.
Thanks For Visit

With your PC rebooted, you should find Anbox available in your desktop menu. Click to launch; You will immediately see the Anbox window.

If nothing happens, or you get stuck at the splash screen with the Getting Started message, cancel it or wait for it to end. Then open a new terminal and enter

Next, click the icon in the menu again. A few moments later, Anbox will run. This is a known bug in distributions based on Ubuntu 16.04, and should not affect newer distros.

With Anbox running, you’ll see a list of basic Android apps you can run on Linux, such as Calendar and Email. Just left click this icon to open it; they will appear in a new window which you can resize as needed. If you need a browser, WebView Shell is included.

To add your own apps and games, all you need to do is download (or copy from another device) the appropriate APK files. This is an installer file, like a DEB (or locked) file on Linux, or an EXE file on Windows. Usually available via Google Play on Android… but that’s not the case on Anbox.

Since Anbox’s Android deployment is not registered, you will not be able to access (or install) Google Play. Therefore, the answer is to download and move the APK.

Where will you find APKs? Several Google Play alternatives are available, but if you prefer to use the Play Store, you have several methods to extract APKs from Google Play. While Google restricts access to the Play Store to registered Android devices, bypassing this is not piracy. If you have an APK file, or it’s freely available, it’s okay to run it on unlisted Android devices.

Once you get the APK file you want to install, you have to enable installation from unknown sources. Do this by opening the Settings menu from the apps screen, then finding Security. Here, enable the toggle next to Unknown Sources, and click OK to accept.

Once this is done, locate your APK file and double-click the first file you want to install. A few moments later, the application or game should be ready, and will run in its own window on Linux. Installed games are listed next to all other apps.
Now You Can Run Android Apps on Linux