JNE has long been a shipping and expedition service trusted by the people of Indonesia. JNE agents are spread in almost all cities in Indonesia. However, when shipping goods, there are usually obstacles and obstacles. Fortunately, the JNE complaint method is not difficult.

JNE is not only used by individuals. Industries such as e-commerce and marketplaces also entrust their delivery to JNE. The same applies to private and government agencies.

And what are the problems that usually occur during the process of sending goods?

Let’s review it to the end! 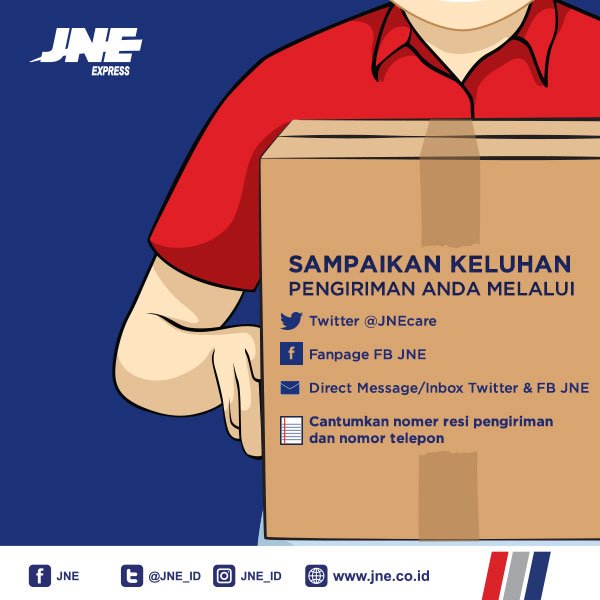 Some Frequently Occurring Delivery Problems, and How to Complain to JNE.

Even though he has been in the expedition and delivery service for decades, JNE does not deny that there are always problems in the field. Not infrequently people also complain about shipping problems. However, JNE remains committed to improving its services.

Actually, what are the common problems that people often encounter when using JNE? Check out the following list:

JNE said that there are at least 3 things that often cause late deliveries. First, massive infrastructure development has occurred in a number of areas. For example, for deliveries to Bandung via Cikampek, traffic jams are bound to be constrained due to a construction project.

Second, the weather is also often a trigger factor that makes shipments late. Moreover, the last few years the weather is often erratic. Not to mention if there is rain accompanied by strong winds. Of course this can make shipping especially those using motorbikes hampered.

Third, government policies are also considered by JNE to be the trigger for delays in delivery. One of them is the implementation of odd-even in Jakarta. Of course, vehicles whose license plates do not match have to look for alternative roads. And this of course creates additional time that triggers packets to arrive late.

Not all shipping addresses can be easily found. Not to mention the difficult terrain to reach the intended address. Things like this can also make delivery problems. Goods arrived late to the recipient.

Usually, if the JNE officer cannot find the address, then the package will be brought back to the JNE sorting center in that city. The next day will be sent back with a different officer.

The potential for damaged goods during shipping is quite large. This is because items such as snacks, glassware, or fragile items can be damaged on the road. Uneven road conditions can cause shocks during shipping. This has the potential to cause the finished item to crack, detach from the arrangement, and also break.

In addition, poor packaging can also cause goods to be damaged when shipped. Not only packing problems, during the sorting process, the sorting officer who is not careful can also cause damaged goods. For example, putting things down hard or piling things up without paying attention to the category of goods.

Other Interesting Info: How to Complain this TIKI Must Know Online Shop Businesses

There are many reasons for lost items. For example, sent to the wrong address but still received by the wrong recipient. Then also lost during sorting or while in transit.

These lost items will generally be compensated by JNE. The amount of compensation is generally 10 times the postage. However, if the goods sent are insured, the replacement claim process will be borne by the insurance company with a higher value.

How to Complain to JNE for Goods Delivery Problems

Here are the ways that can be taken:

The first way to complain to JNE is to send an email to customer care. In the subject of the email, just write the problematic package and include the receipt number.

Next, in the body of the email, write down the shipping problems experienced in detail. Don’t forget to include your name and phone number where you can be reached. After the email is sent, the sender will usually receive a reply from JNE customer care.

The response from this email can be returned by the sender if it is judged that it has not resolved the problem. Generally, the first reply email from JNE will not take long. However, if the problem cannot be resolved in the first reply, the problem must be escalated to a higher level. This usually takes longer.

Other Interesting Info: Listen! How to Complain J&T for a Quick Response

JNE can be contacted at (021) 29278888 and will be responded to directly by JNE customer care officers. This method is considered the fastest because the sender can communicate directly. This two-way interaction makes complaints quickly recorded and handled.

Apart from being a promotional and informational tool, JNE’s social media accounts are also used as a means of submitting complaints or complaints. Senders can submit complaints on Twitter, Facebook and Instagram accounts.

The following are social media accounts from JNE:

Submit a complaint such as when sending an email by including the receipt number, sender’s name, recipient’s name and telephone number that can be contacted. Explain what is the problem or problem with the package sent. This method is quite effective because the response given tends to be fast.

Other Interesting Info: How to Complain SiCepat (When Package Delivery Is Constrained)

The next JNE complaint method is through Ask Joni. Many people don’t know that JNE has an Ask Joni page. This website is intended for JNE users who want to submit complaints about shipments of goods. How to complain is easy and can be responded to quickly.

The public only needs to open the Ask Joni website page, then fill in the requested data such as name, cellphone number, and also address. In the subject, choose customer service and fill in the message with the complaint that is being experienced. Fill in the delivery receipt because JNE will check the status of the package.

5.
Come to the JNE Office

Coming to the JNE office can also be done to solve problems regarding package delivery. In Jakarta, the sender can come to the JNE head office on Jl. Tomang Raya No. 11, West Jakarta 11440. For those who live outside Jakarta, please come to the JNE representative office in their respective city.

JNE officers at the head office or representatives will help deal with complaints quickly. Prepare a shipping receipt number to make it easier to check the goods and solve problems with the shipment of goods.

Other Interesting Info : Olshop Many Shipments? Listen! How to Get Cheap Cargo Fees

Those are some ways to complain about JNE that can be taken by people whose shipments are problematic. It is recommended that the sender also minimizes shipping problems by writing a clear shipping address, solid packing, and also using insurance options when sending goods.