Desktop gadgets are useful widgets that can be added to the Windows desktop to increase productivity. They are long gone, but don’t worry you can add desktop widgets to Windows 10 using these third-party tools.

What are Windows Gadgets

It seems hard to appreciate ten years later, but desktop gadgets were very popular back then. Capable of displaying the time, weather, sticky notes, and even CPU speed, these widgets are essentially mini-apps that can be positioned around the desktop mostly on the right side, but they’ll also hide behind your main app, acting as if part of your desktop. desktop background.

Unfortunately, with the arrival of Windows 8, this widget was abandoned. Suddenly, you can’t immediately see what time it is in your office, or get an RSS feed on your desktop. Instead, this kind of information is aggregated into live tiles in Windows 8, and to a lesser extent, Windows 10.

Fortunately, by returning to the dominant desktop in Windows 10 as opposed to Windows 8’s Start-screen-first approach, gadgets and similar tools can be restored.

The main reason why Microsoft chose to release Gadgets from newer versions of Windows is security related.

In 2012, Microsoft announced that the vulnerability in Gadget can enable Remote Code Execution, where remote attackers can gain access to your PC. They noted that:

Using these two attacks, hackers can run code under your account profile potentially opening back doors for other malware or even hijacking your entire PC. A fix was released to disable the Windows Sidebar and Gadgets in Windows Vista and Windows 7. A few weeks later, Windows 8 was released, and Gadgets are no longer available.

However, there is no reason to let hackers limit your productivity. It’s time to bring some new widgets to your Windows 10 desktop.

Get New Gadgets in Windows 10 With HD Widgets

Available from the Microsoft Store, Widgets HD lets you place widgets on your Windows 10 desktop. Just install the app, launch it, and click the widget you want to view. Once loaded, the widget can be repositioned on the Windows 10 desktop, and the main application “closed” (though it remains in your system tray). 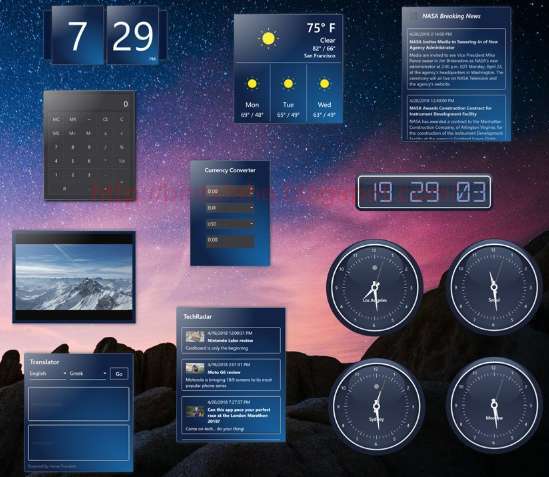 As with Windows Vista widgets, hovering your mouse over the widget shows an X button to close it. You can even view the Settings cog, to make adjustments. For example, the weather and clock widgets let you choose your location; The weather widget also lets you choose Fahrenheit or Celsius.

(Note that older versions of the app don’t allow individual widgets to be placed on the desktop, taking into account some bad review scores.)

Perhaps my favorite solution, if only because it’s so easy and light on resources, is Windows Desktop Gadgets. This solution is designed to work with several languages, which can be added in the installation guide. 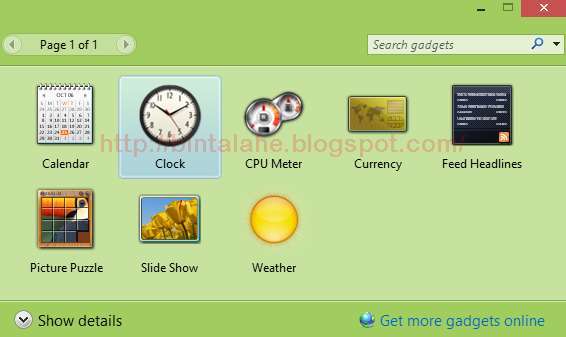 DesktopgadgetsRevived-2.0.exe must be extracted from the downloaded ZIP file before running, and once installed, traditional Windows Vista/7 style gadgets can be accessed by right-clicking your desktop and selecting Gadgets.

You will notice that a gadget has been added to Control Panel> Appearance and Personalization. You can add them to the desktop by clicking and dragging them into place.

Once installed, you will see that it is basically a replacement for the original gadget. As you’d expect, clicking the gear icon in the corner accesses the settings, allowing you to resize and configure each gadget. It’s basically the original Windows Desktop Gadget, repackaged to run with Windows 10 (and Windows 8).

Another lightweight option, 8GadgetPack is free and allows users to run gadgets on Windows 8.x and Windows 10. 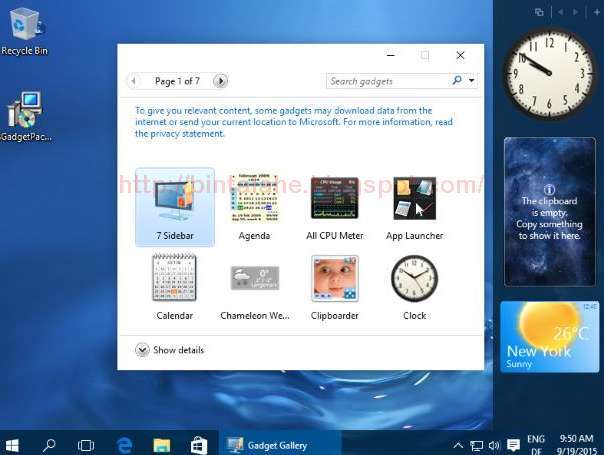 To use 8GadgetPack, visit the info and download the MSI file via the info on the right side of the page, and install it. Once it opens, simply click on the + button to open a list of gadgets and drag this to your desktop. While a Windows Vista-style sidebar is included, gadgets aren’t limited to this location.

Again, every gadget has an options screen. Here, you can set the color, location and other data to configure the gadget according to your purpose. When you’re done, you have to choose a useful gadget to increase your productivity!

Get Contemporary Desktop Gadgets With Rainmeter

If screenshots of old-style desktop gadgets don’t really float, you have other options. Rainmeter is a tool for customizing the Windows desktop. 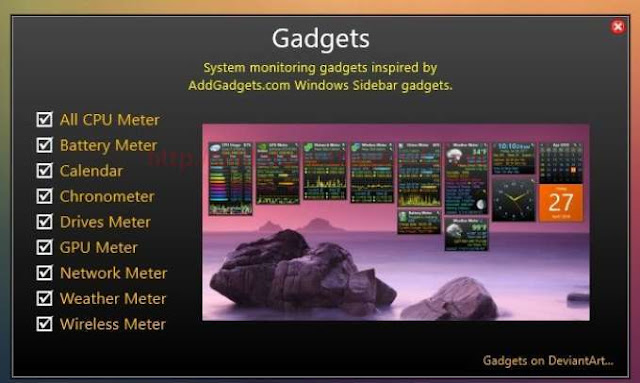 Among its features is the ability to introduce information to the desktop, such as the clock, live hardware statistics, current and forecast weather, and more. You can basically use Rainmeter to display everything a gadget is doing, but with enough style.

Now, if you are happy with the gadget options above, then by all means stick with it. Rainmeter opens up a whole new world to install and customize, and if you’re really looking for a gadget to increase productivity, you should be on the lookout. Configuring Rainmeter can be a huge timeframe, so keep things as simple as possible.

Will You Use This New Gadget Desktop App

Each of these solutions is worth a try and can help increase productivity. For example, using a clock set to a foreign time zone can be invaluable when collaborating with people overseas, or simply checking that your aunt in New Zealand is awake before you call.