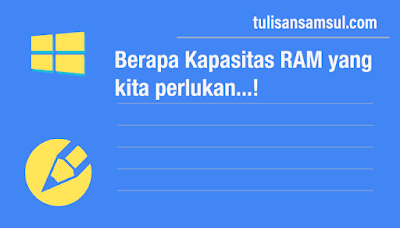 How big RAM Capacity What We Need – For gaming needs the greater the capacity RAM it will get better, the game will run more smoothly, even in certain cases it can increase the frame rate. Is it true?

How Much RAM Capacity Do We Need?

RAM (Random Access Memory) is a storage medium whose function is to store data temporarily and that data is data that is processed by our laptop or computer.

It’s different from a hard drive or SSD, so if it’s a storage drive, it can store data permanently, while RAM is volatile, meaning that if the power source that is removed is turned off, the data will be lost.

How much RAM is needed for gaming?

Now for RAM capacityitself, for gaming needs, how much RAM capacity should we install? Some say 8GB alone is enough, but there are also those who say that 16GB it’s a minimum number, and some people say to maximize performance 32GB is the best, actually which one is the most appropriate?

RAM We can think of it as a bucket where water is stored. So if you have a bucket with a capacity of 10 liters, but you only have 3 liters of water, then there will be a lot of unused empty space because there is only a little water and vice versa, if the bucket is 10 liters, but the water you have is 15 liters, then the bucket will not be able to hold all the water.

The same thing happens to our PC memory, if you have one 16GB while the program you are running only needs 5, then there will be a lot of empty and unused memory, but if you have 16 GB while the program you are running requires 20GB, then the RAM you have is not enough to run existing programs. So if it’s not enough, what happens? Will the data be discarded? No.

Relationship Between RAM and Virtual Memory

On our computer there is a system called Virtual Memory, so when the RAM that we install is not enough to accommodate the data to be processed, then it will be partially transferred to the storage drive. So there will be data transferred from RAM to hard drive or SSD. So even though the RAM is not enough, it doesn’t mean the program can’t be run, it can still be done, with a division of tasks. Some will be done by RAM and some will be done storage drive. If so, what does it mean to install? RAM small is enough, after all will later be assisted by a hard drive or SSD? It’s not like that either.

RAM installed on our computer has a very large bandwidth, you use DDR4 with a frequency 3200 mhz, there he has a bandwidth of up to 25.6GB/s. And when the RAM was not enough, then some will be moved to a storage drive, hard drive or SSD. The problem is whether the storage will help or interfere, the transferred hard drive is at least about 100 MB per second, the Sata SSD is only in numbers. 500MB/s, even if you use nvme though, the 4th generation which is still very expensive, it’s just stuck in the range 7GB/s, far from the RAM which reaches 25.6 GB/S. And the result is that when this virtual memory is run, it could even be that the program you are running is slow. Because he was the one who should have transferred 25.5 GB, instead it was stuck to 100, 500 or 7 GB according to the storage installed on your computer.

What if Virtual Memory is turned off?

As is virtual memory, it’s true that the program might be slow if the RAM is not enough, but without virtual memory, that’s how it is RAMit doesn’t fit, then the computer immediately crashes, it can’t be operated, with virtual memory it can be opened slowly so you have time to set which programs you need to turn off to be able to launch the heavy program earlier. If that’s true, everything will depend on how much RAM capacity you install.

As for how ideal it really is, it can’t be estimated at once, because people’s needs are different, every application, every game, will eat up RAM with different amounts too.

What is the limit on the amount of RAM memory that can be used on computers today?

People’s needs may be different, maybe if you just for gaming, 16GB it’s enough, but for editing, maybe 32GB also lacking, but you only need it for office, maybe you don’t need to use RAM, that’s enough.

What is certain is that in general, if the need is modern gaming or editing that is not too heavy, 16 GB is the minimum number you can install on your computer.

Next question RAM speed itself, we know that ddr4 has a very large capacity, some are just 2100 mhz speed, there are also those who arrive 5000 mhz. Does it mean that if we upgrade from RAM 2100 to 5000 with a more than doubled speed increase, will the real performance we get also be that much, double or maybe more? We will discuss in the next article. Thank you.