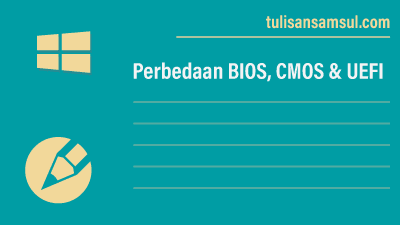 Difference between BIOS, CMOS and UEFI – If your PC keeps getting errors, you ask people for help, usually the mainstay is clearing the CMOS or resetting the BIOS. What’s the difference?

BIOS and CMOS are two terms that are often used interchangeably. But, do they have the same meaning, so what does it have to do with UEFI!.

In this article, we will cover BIOS, CMOS, and UEFI. What are they actually and we will understand the difference better.

BIOS or Basic Input Output System is a low level program that is embedded in the motherboard whose job it is to recognize all installed hardware before the motherboard continues the process to the OS. So, when you turn on the computer, and it turns out that the BIOS detects that there is something wrong with the hardware, it will give a notification and will not continue the process to enter the OS (Operating System).

When the BIOS finds a hardware error, it will notify you that there is a hardware malfunction. There are several ways of notification, such as writing on your laptop screen, or it could be with the Debug Code LED. 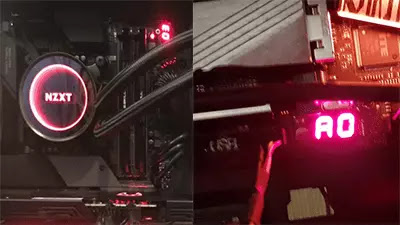 In the BIOS we can do many settings, from the simplest set of time and date, adjust CPU speed, set the order of detection of SSD hard disks, set sleep, shutdown, power up and many things that can be set in the BIOS. Well, the settings that have been set in the BIOS will be stored in a separate memory chip called the CMOS (Complementary Metal Oxide Semi Conductor). So, CMOS and BIOS are two different things, BIOS is a chip for storing firmware, while CMOS is a chip for storing BIOS settings. So, it can be likened, bios is the operating system, and cmos is storage to store our work data.

When an error occurs on the computer, which suddenly does not want to enter Windows, usually there is an error in hardware detection, either something is not detected, or the bios itself detects an error. For example, our storage drive that contains Windows is not detected in the first order. Finally the computer can not enter into Windows. If it’s not hardware damage, then what we need to do is reset the data stored in the CMOS, because there may be an error in the data stored there. So after we reset the CMOS, it is hoped that the BIOS will detect our hardware again from zero again.

Its function is so that when the computer is turned off, the CMOS is still supplying power from the battery to be able to keep storing data from the BIOS. To delete the data stored in the CMOS, all we need to do is cut off the power supply that supplies the CMOS earlier. There are two ways to do that. 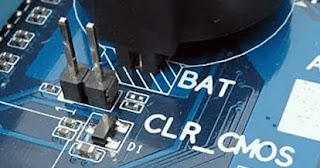 The first is to connect the two clear CMOS pins on the motherbord, depending on your motherboard, some have to be connected with a screwdriver, but some have provided a connector pin for clear CMOS. The second is to remove the CMOS battery. So the button battery on the motherboard, you just take it off and wait, it might take about 5 minutes or so. After that, plug it in again, the important thing is that you have made sure that all the electric power that supplies the CMOS has been exhausted. 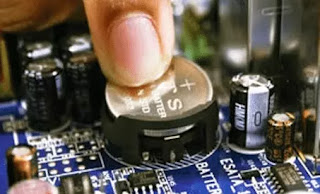 BIOS was used in the 80’s, and although it has been updated a lot, it turns out that technological developments have far surpassed BIOS technology. For example, the BIOS cannot boot from a storage drive of two terabytes. In fact, now people have commonly used hard disks of 3 tera or more. Then the BIOS can only work with 16-bit CPU mode which can only use one MB RAM. With this limitation, the BIOS cannot detect multiple hardware devices at once. Even though now on a modern motherboard, there are a lot of hardware installed, not only CPU and RAM, but hard disks, SSDs, JPUs, LAN cards, audio cards and so on. Automatically, this will cause the boot process to be slower, because all this hardware must queue up one by one to be detected by the BIOS.

Actually, Intel has been preparing for a BIOS replacement for a long time, they have developed the Extensible Framework or IEFI in 1998, but it was only in 2006, Apple was the first to decide to switch to using IEFI and other PC manufacturers have not followed suit.

It was only in 2007, AMD, Intel, Microsoft and other PC manufacturers began to agree to use the Unified Extensible Framework Interface or UIEFI. You could say that the computer made in 2007 is here, it doesn’t use BIOS anymore because it has switched to UEFI, but because the term BIOS has been used for decades, the term BIOS is still used so that people don’t get confused, even though what is installed is UEFI, not UEFI. BIOS. So what’s the difference with the BIOS!. A huge amount. What is certain is that there is no longer a two-terbyte limit for UEFI in theory it can detect up to 9.4 zetabytes. Then UEFI can already run in 32 and 44-bit CPU mode, meaning that the memory space used by UEFI is larger, the effect is clear, the boot process will be faster because UEFI can detect a lot of hardware at once.

Then with this larger memory space, the appearance of UEFI also gets a big change, if previously the BIOS for decades was glued to a blue screen and only controlled by the keyboard, UEFI now appears much more attractive, the color is not just blue, but can be changed- replace with another color according to the taste of the manufacturer. Then for control it is also not glued to the keyboard, but can also be controlled with the mouse. Not even a few motherboards that have full HD resolution for the UEFI interface.

In addition to an attractive appearance and a faster boot process, it turns out that UEFI still has fastboot mode and some even have ultra fastboot. The faster you choose, the more hardware recognition processes are skipped, so the system can skip directly to the OS. Only fast mode has a weakness, to enter UEFI we usually have to press Del or f2 when turning on the computer. Now, because this process was skipped at the beginning, we don’t go into UEFI settings, unless we first enter Windows and then enter UEFI when Windows restarts. For how you can google. The problem is if an error occurs during hardware recognition, then you don’t enter UEFI settings and you don’t enter Windows. So you will stop at a black screen. And to solve this problem, there is only one thing you can do, which is clear CMOS. So even though you’re using UEFI, the CMOS is still there.

In this second feature, there is a secure boot, meaning that UEFI will validate the operating system before continuing to the boot process. So, if there is a virus or malware, then UEFI can ideally stop the boot process so that the virus does not spread. But I guess we can’t expect this feature because in practice, viruses and malware still hang around Windows.

In addition, UEFI already supports networking. What is the function of connecting UEFI internet, what is clear is that you can update the firmware directly from UEFI. This old term is BIOS update. So if you first update the BIOS, you have to download the file, continue to use it with a flash and so on. Now, you can directly connect to the internet via UEFI and immediately update the firmware.

In addition, this networking feature also works for UEFI remote control. So if you used the BIOS or were going to set the BIOS, you had to sit in front of the computer, now you can do everything remotely, remotely using internet control via a computer elsewhere. But these features are not all on the motherboard. So you check your motherboard manual again whether it supports this feature or not.

Briefly at this time the BIOS is no longer there. It is completely made by UEFI. But make no mistake, there are still hardware that can only run under BIOS, one of which is related to storage. We discussed earlier that the BIOS has a two terabyte limit for boreal drives. This is because the BIOS is still using the MBR system or Master Boot Record to boot into the operating system. If your hard disk or SSD is still using this MBR system, then you will not be able to enter Windows via UEFI. Because UEFI has switched to GBT or GUID Partition Table. Now to be able to enter Windows with this MBR hard disk, you can activate legacy mode in UEFI. This legacy means that we instruct the system to be able to work using old hardware that is still using the MBR system earlier. We will discuss about GPT and MBR in the next article.

Some hardware errors can be detected by the BIOS or UEFI, and usually they will give a message what the error is. But the problem is, not everyone understands what the BIOS and UEFI are saying. So, if you don’t understand when an error occurs with your laptop, just give it to a trusted service technician, rather than later you will get the wrong detection and then buy the wrong hardware replacement. Or if you want to be patient, study a lot, read a lot of books, ask a lot of people and so on.

Well maybe that’s it for a ‘brief’ article on BIOS, CMOS and UEFI. Hopefully increase knowledge and a lot of knowledge. Thank you.

Editor’s note: This article was originally published on August 18, 2021, and was updated on August 19, 2021 to reflect changes made in the Update.