The time leading up to the launch of the Samsung Galaxy S10 was plagued with leaks, leaving quite a bit of mystery in the phone and its features.

However, Samsung has officially announced its newest line of phones. Here’s everything you should know about the smartphone giant’s 2019 flagship device.

The 2019 launch of the Galaxy S series flagships is the first time Samsung has launched four devices instead of two as part of its flagship range.

As you might expect, Samsung has launched the Galaxy S10 and Galaxy S10+, as per usual tradition. However, the company has also launched the Samsung Galaxy S10e. These are smaller entry-level devices with lower specs namely the S10 and S10+. Apart from that, the Galaxy S10 5G also makes an appearance.

The Samsung Galaxy S10 is the mid-tier flagship that was released in the S10 range. It includes most of the premium features one would expect from the S range with a smaller battery and display than the S10+.

Here’s a summary of the features of the Samsung Galaxy S10:

The Galaxy S10+ includes the features of the S10, but with some additional bells and whistles. Among them are a bigger display, more storage, and a bigger battery.

You can see a summary of the Galaxy S10+ features below:

The Galaxy A series is an affordable mid-range phone from Samsung. However, the company has changed this with the introduction of the Samsung Galaxy S10e.

Below is a summary of what the Galaxy S10 5G has to offer:

Samsung has included three cameras in its S10 and S10+ smartphones. The main cameras include a 12MP telephoto lens, a 12MP wide-angle lens, and a 16MP ultrawide lens. That ultrawide lens allows you to zoom in up to a 123-degree angle. 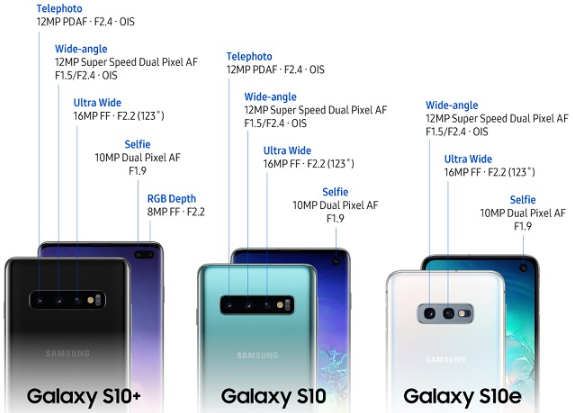 This means that you can take close-up bokeh effect photos along with ultrawide panoramic shots. In addition, the Galaxy S10 camera includes AI tools, such as scene recognition that can recognize faces, vehicles, animals, and other objects.

Galaxy S10 5G Has a Total of Six Lenses

While the Samsung Galaxy S10 5G emphasizes 5G capabilities in its name, this isn’t the only feature that separates it from other devices in the S10 range.

The S10 5G includes a total of six lenses: a quadruple-lens rear camera and a dual-lens front camera. It’s also the only phone in the series to include a 3D Depth lens, which Samsung says improves the quality of blurred background images.

Here are the lenses included in the quadruple camera kit:

The dual front-facing camera on the S10 5G is different from the dual camera featured on the S10+. The S10 5G selfie camera includes a 12MP lens along with a 3D Depth lens.

What is a 3D Depth Lens?

The 3D Depth Lens featured on the S10 5G uses a special infrared light signal to measure and capture image depth. While this improves background blur, it has another interesting use of using Live Focus mode in videos.
Samsung says about this feature:

“This innovative camera allows the device to accurately capture depth by measuring the length of time it takes for infrared light signals to reflect off the subject of a photo. The camera uses the resulting depth information to improve portrait-style image quality, and to bring exciting new features such as Live Video to life. focus and Quick Measure.”

Samsung fans have been asking the company to incorporate an under-display fingerprint scanner since the launch of the Galaxy S8. With the S10 range, Samsung has achieved this by using an ultrasonic fingerprint sensor in its S10, S10+, and S10 5G devices. This sensor is an advanced in-screen fingerprint scanner that includes the ability to perform a 3D scan of your fingerprint. According to Samsung, this increases the security of scanning when unlocking your device with your finger. This sensor is better able to detect fake fingerprints in both 2D and 3D.

The use of ultrasonic technology instead of optics also means that the scanner will perform better in wet conditions, according to the company.

Only the Samsung Galaxy S10 5G includes 5G functionality, as the name suggests. Other devices in range don’t include this feature.

In the US, the Galaxy S10 5G will initially be a Verizon exclusive.

In Europe, carriers partnering with Samsung to provide these devices include Deutsche Telekom, EE, Orange, Sunrise, Swisscom, TIM, Telefonica, and Vodafone. 5G functionality will be available in France, Germany, Italy, Spain, Switzerland and the UK.

Wireless charging has become the standard for most premium smartphones, but Samsung has now introduced a reverse wireless charging function for the S10 range. If you have a Galaxy S10, S10+, S10 5G, or S10e, you will be able to charge other devices by placing them on the back of the smartphone. Samsung dubs this function as Wireless PowerShare charging

This feature will work to power the Galaxy Buds, the wireless earphones announced at the same time as the smartphone launch.

Pre-orders for the Galaxy S10e, S10 and S10+ open on February 21. Unfortunately, the availability of the S10 5G is unknown at this time.

With the iPhone X line normalizing smartphones that cost well over $1,000, Samsung hasn’t shy away from high prices for the Galaxy S10 range.