We will show you how to open Terminal on Mac using several methods.

Before learning how to use Terminal on a Mac, you first need to know how to open it. There are many different ways to open Terminal on macOS; We’ll explain each one below, starting with the fastest option.

Spotlight is the fastest way to find and open documents, folders, and apps on your Mac. Press Cmd + Space to open Spotlight and start typing Terminal to look for it.

You’ll see Terminal appear at the top of your search results, usually before you’ve even finished typing. Press Return to open it.

Launchpad on macOS is the easiest place to view and organize your apps, including Terminal. Press F4 on the keyboard to open Launchpad. You may need to press Fn + F4 if special features are disabled on your function keys.

Start typing Terminal to search for it and press Return once you find it. Or, click Other to open the More folder in Launchpad, then click Terminal from within this folder.

Siri takes a few moments to process your request, then opens a new Terminal window.

You can also use the Finder to open Terminal from the Applications folder on your Mac. open the window Finder new and choose Go > Utilities from the menu bar. Then double click Terminal to open it. 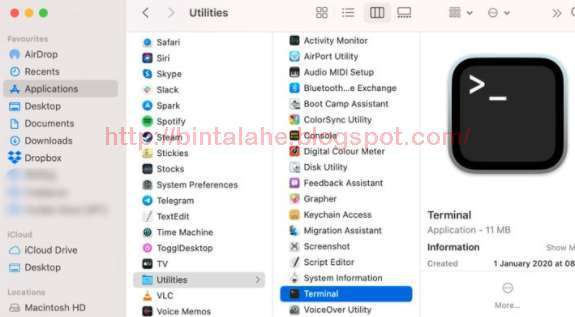 Or, choose Applications from the sidebar and open the folder Utilities in your app to find Terminal.

If you use Terminal a lot, you may want to create a shortcut in the Dock for faster access. First you have to open Terminal using one of the previous methods. Then drag and drop the Terminal icon to a new position in your Dock.

Make sure you move Terminal to the other side of the divider Recent Applications. Later, you can open Terminal on your Mac by clicking this shortcut.

Sometimes you need to open Terminal from macOS Recovery boot mode to access or edit certain system files on your Mac.

To do this, press and hold Cmd + R when your Mac starts booting into macOS Recovery. Then go to Utilities > Terminal from the menu bar to open Terminal.

How to Close Terminal

Once you’re done using Terminal, you’ll need to close it again so your Mac doesn’t waste energy keeping it open. Make sure to let any commands you run finish what they were doing before trying to close Terminal.

Use button X red at the top left of the Terminal window to close that window but leave Terminal running. This is useful if you have multiple windows open in Terminal but don’t want to close them all.

To close Terminal completely, including all your open windows, press Cmd + Q or go to Terminal > Quit Terminal from the menu bar.

Learn All Terminal For Mac

Now that you know how to open Terminal on your Mac, you need to make sure you learn everything you can use it for.