The Samsung Galaxy Note 9 was released with several improvements over its previous version, the Galaxy Note 8. It has better battery life, a slightly bigger screen, and a better processor for those who want to use the device for gaming. But the features that Note users are most passionate about are those built into the improved S Pen. 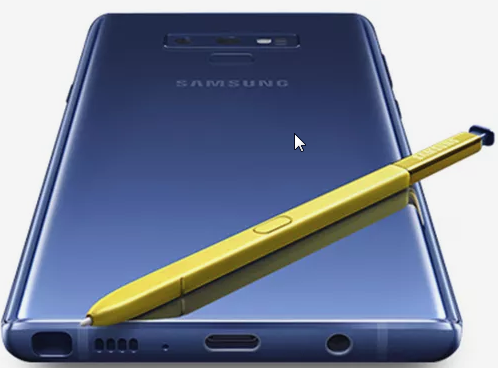 All the features of the S Pen from the previous version are still there; Direct Messages, Quick Notes, and Screen Compose are among the standard features that you can still access with the touch of a pen or the press of a button. What’s really interesting are the new features that are enabled by adding battery and low energy Bluetooth capabilities.

Adding a battery to the S Pen might seem like it would make the stylus heavy, but Samsung took the usability of accessories into consideration when designing the powerful S Pen. The rechargeable battery fits into the stylus without changing its size, so users who liked the previous Note stylus will be very happy. And even though it’s small, the battery is good for a full 30 minutes and can be fully recharged in under a minute. 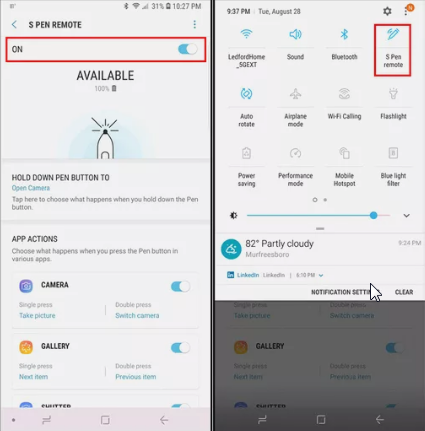 Users can also expect the S Pen to work with all previous functions, even on a dead battery; power is only required to use the S Pen to operate the remote control and Bluetooth with low energy function. It is even possible to turn the S Pen ‘off’ for those functions if your phone is running low on power.
To turn off Bluetooth and perform the S Pen function:

Alternatively, you can also use the S Pen button in the Notification shade window (accessible by dragging from the top of the screen to the bottom) to turn the actuated function on and off.

Note: The powered S Pen function can change how you use the S Pen, causing it to pop out of the holster more often. To help prevent leaving your S Pen behind or even losing it completely, be sure to go to Settings > Advanced Features > S Pen and toggle on Alarm. If your phone is too far from your S Pen with the screen off, an alarm will sound reminding you to put the S Pen back in its holster.

Use Samsung S Pen as a Remote Control for Your Entertainment

With a 6.4-inch high-definition display and Dolby Atmos enhancing audio on the Galaxy Note 9, you’ll want to watch TV and movies, listen to music and audiobooks, and view videos on YouTube and other sites. The S Pen’s powerful controls make this an even easier experience, and there’s no need for additional settings to control your entertainment, except to make sure the S Pen is turned on. 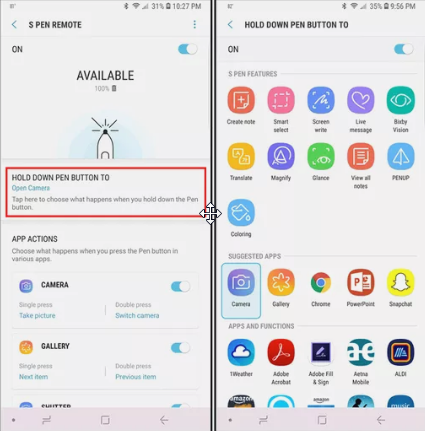 Just open the entertainment of your choice and start streaming. Some apps, like Spotify, even have universal controls, so when you want to pause your music, movies, videos, and audiobooks, just press the button on the S Pen. To skip to the next track or song, quickly press the button twice.

You can even set the S Pen to automatically launch your favorite entertainment (or other program) when you press and hold the S Pen button.

To adjust what opens when you press and hold the S Pen button:

How many times have you heard it? The problem is that sometimes getting the perfect picture isn’t easy. Positioning the camera correctly means you need longer arms. Or a selfie stick. And if you don’t have both… Well, the shots aren’t great. 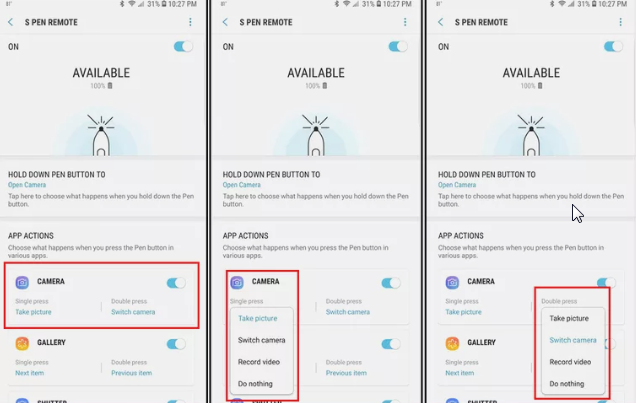 In addition to having dual 12 MP cameras, the Note 9 lets you take better pictures, and be a part of those pictures using the remote shutter control capabilities of the S Pen. Called App Action, this action will work with your S Pen even if the camera is not the app you choose to open when you press and hold the S Pen button.
Application Action options include:

Application actions, including those for the camera, are also customizable. Here’s how:

Now your S pen is customized the way you want to use it when you take pictures or videos with your phone.

Productivity with Your Samsung Stylus Pen

Galaxy Note users know how to have fun, but they also know how to get things done, and the Galaxy Note 9 makes work easier, especially when you put the S Pen to work.

One of the most anticipated functions of the S Pen is the ability to control PowerPoint presentations. When paired with Samsung’s DeX capabilities that allow you to connect your Galaxy Note 9 to a large screen, wireless keyboard, and mouse, your S Pen puts you in control of events; and it’s easy to do!
To control a PowerPoint presentation:

As with the camera, you can customize how the buttons on the S Pen control the presentation. Go to Settings > Advanced Features > S Pen > S Pen Remote and use the App Actions informasi below PowerPoint to assign a single or double press to move the presentation to the Next Slide or Previous Slide. Of course, you also have the option of Doing nothing if that’s what you prefer.

Similarly, you can use these same settings and your S Pen to control the Chrome browser, Hancom Office Editor, and some social media apps, such as Snapchat.