Many people think that Google Play is the only option that Android users have for downloading apps. But there are actually some quality alternatives.

Also, if you buy a device that isn’t allowed to run the Play Store, gaining access can be very difficult (if not impossible). You have no choice but to use an alternative.

Frankly, there are many reasons to use alternative app stores on Android. The options below can help you find lots of great apps even without Google Play.

The first and most obvious alternative is the Amazon Appstore. This is probably the biggest competitor to the Play Store, as it is the default app store that ships on all Amazon Fire tablets.

We’ve compared the Play Store to the Amazon Appstore in the past, but Amazon’s options have been updated and evolved a bit since then.

Amazon’s newer apps match the current flat app interface. The navigation menu that used to slide out from the left is missing. Now you can navigate the categories by tapping the icons at the bottom of the screen, just like you would in the iOS app. This section helps you discover new apps and view your current library.

They also track your Amazon Coins, a form of digital currency similar to gift cards. The app also holds a lightweight social component called Pulse. On the homepage, you can scroll down to see featured apps and what’s currently popular. There is also a section for free software and apps for sale.

The Amazon store may not match the size of the Play Store, but it feels like a worthy alternative. A large number of the most popular applications are present, if you exclude the large collection of Google services. Of course, that’s a big warning. Many people consider Google’s software to be the main reason they use Android over iOS.

On the other hand, if you prefer Android over iOS because Android is technically open source, then F-Droid is the app store for you. F-Droid doesn’t have nearly all the apps like the other options on this list. However, it is the largest mobile app store that has exclusively free and open source software. 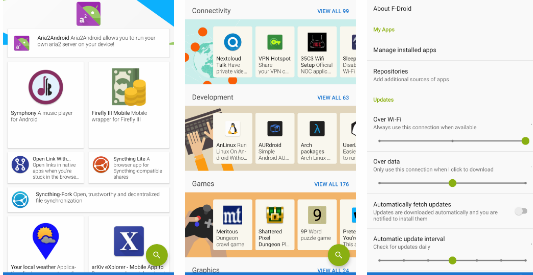 You don’t have to love Linux to find value in F-Droid. By definition, the apps here are all free to use. Not only that, you can have greater confidence that the software does not contain any malware. F-Droid goes even further to warn when an app can track your behavior or location.

Previous versions of this app were very basic. The latest version not only conforms to current Android design guidelines, but provides categories and recommendations to help you find an app that does what you need. This is invaluable because if you use F-Droid, you will probably have to replace most of the apps you used to use. We’ve highlighted our favorite open source Android apps to give you some ideas.

SlideME is an app store that ships a lot of devices that don’t have Google Play. It targets device makers looking to sell in areas where the Play Store doesn’t serve very well. SlideME also looks for developers whose apps aren’t accepted on Google Play (though it doesn’t allow apps with adult content). 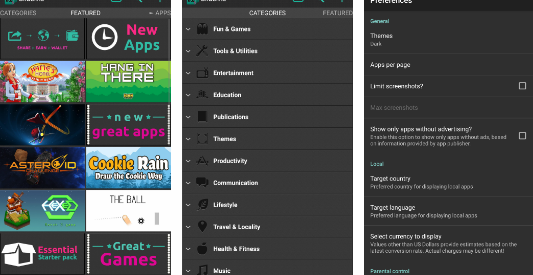 The store app that you download to your phone is called SAM, SlideME Application Manager. SlideME’s selection of apps is bigger than F-Droid, but smaller than Amazon’s. You’ll find more games here than on F-Droid and can avoid tracking using Amazon.

While SlideME may reach areas not served by the Play Store, the company is actually based in Seattle. Every application should be reviewed, so you can expect a certain level of quality and security.

The store interface hasn’t seen an update in years, but it still works and is easy to learn. There are many ways to discover new apps, which is a plus. Selecting an app gives you a download button, description, screenshot, review, and a few more options at the bottom. This is a pretty standard number of options, similar to what you might find on the Play Store.

However, sometimes there are thin banner ads running at the bottom of the app, which is annoying if you accidentally press them.

As the name suggests, Humble Bundle didn’t start out as an app store. Initially, it offered a set of semi-regular bundles that let you pay as much as you wanted for a single game package. If you pay more than a certain amount, you unlock the full bundle. Plus, a portion of each sale is donated to charity. 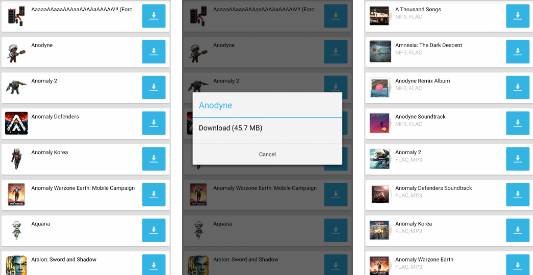 Eventually, Humble Bundle evolved from a series of bundles into a full-fledged app store. The site also sells soundtracks and books.

But the bundle goes on. Some of the early bundles included Android games. In the meantime, there is also the regular Humble Mobile Bundle which is released separately from the main bundle. The practice is over, but the Android game isn’t gone either. You can still find them in the Humble Shop, and you can occasionally see someone making an appearance as part of a bundle.

The Humble Bundle Android app is not a complete store. Instead, it’s a hub for downloading apps you’ve purchased and installing occasional updates. The interface is a bit outdated, but it still works. The Humble Store may not contain anything anywhere near the selection found on the Play Store or Amazon Appstore, but every download is DRM-free. That means you actually own the software you purchased here, which you can download and back up any way you like.